Samsung Unleashes The Future At CES 2014 - And It's Curved 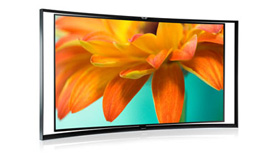 The International Consumer Electronics Show, known as CES, showcases more than 3,200 manufacturers, developers and suppliers every year. This year Samsung opted to release a wild new feature for televisions that is still being developed and applied to ultra-high-end expensive sets with large screens: bending. Simply calling it a 'Bendable TV', demo'd their 85" prototype showing off a TV that can curl towards its viewers at the touch of a button.

Applying curvature to their television technology is nothing new for Samsung - in August of 2013 they came out with the OLED TV, a curved television suggesting a superior viewing experience. What sorts of applications could a bendable TV or even a curved TV have, might you ask? Well, it all comes down to geometry. iMax theater's use a curved viewing screen to enhance their movies. Larger screen resolutions often create a pronounced skew of the pixels and screen if not viewed directly in front of, or near directly in front of the screen. The curvature of the screen allows for a better viewer experience at more positions other than directly in front of the screen. In addition to seating arrangements, curved TVs are being developed with post-processing technologies that may make what we watch seem more lifelike.

While the technology behind the scenes of curving TV's is still being developed for the everyday consumer, it's not hard to see where the next step in television evolution will lead us. To see these behemoth TV's yourself, check out this video of CES and Samsungs launch, by The Verge: