Securing Wi-Fi Access Points in a suspended ceiling has never been easier.

Oberon, a division of Chatsworth Products, recently introduced an update to Models 1047-LPDOME and 1047-FPDOME. The 1047 Series is among Oberon’s most popular lines of locking ceiling enclosure for Wi-Fi access points.

The Model 1047 suspended ceiling Wi-Tile™ enclosure mounts and secures Wi-Fi and small cell APs flush to the ceiling. This steel enclosure replaces a 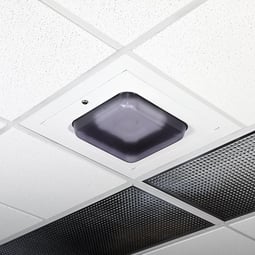 standard ceiling tile, and its larger back-box is suitable for larger APs and antennas. APs are mounted in the door, or inside the models with the ABS or frosted polycarbonate plastic dome. The interchangeable door simplifies AP and antenna moves, adds, and changes. Styles available for both standard flush grid and recessed grid ceilings (-T), and for both North American and European (metric) ceiling systems.

Models 1047-LPDOME and 1047-FPDOME feature a polycarbonate plastic dome over the Wi-Fi access point. 1047-LPDOME offers a white dome, while 1047-FPDOME has a clear dome to allow the AP to remain visible. These RF-transparent domes conceal and protect the access point with a professional aesthetic which complements most suspended ceiling tiles.

The original design for the 1047-LPDOME and 1047-FPDOME included an internal T-bar mount for installation of the AP inside the enclosure. 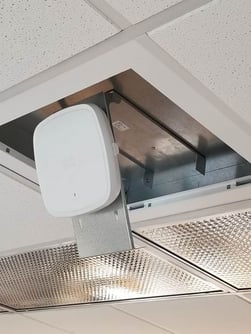 The T-Bar mount has been removed in the latest revision in favor of a swing-down bracket, allowing for easier access to the AP for simplified installation. The enclosure door is opened, and a “plunger” is pulled to release the swing down bracket. In the down position, the access point is readily attached or removed. The swing down bracket has mounting features for Cisco, Aruba, Meraki and other popular Wi-Fi access points.