While there are still optical fiber termination methods that rely on field polish of the optical fiber at the point of installation, the dominant technology today is the polish of optical fiber connectors in the controlled manufacturing environment. Even connectors that are field installable often have their fiber end face prepared in the controlled and repeatable environment of the factory. From the no-epoxy/no-polish connectors like the Corning® UniCam®, Panduit OptiCam or Commscope Qwik Connectors™ to the newer splice-on connectors such as the Corning® Fuselite®, AFL FUSEConnect® or Belden FiberExpress® Fusion, all these connectors share the distinction that their end faces are factory prepared. Furthermore, all these methods share this distinction with one of the newest and most reliable termination methods -- the cassette-based pigtail splice. This is a technology less than a decade old that combines the splice tray, adapter panel, prestripped and routed pigtails and splicing consumables required for optical fiber termination in a single compact cassette as shown in Figure 1. In this article, we will examine the factors that have put this exciting new termination method at the fore-front of optical termination methods. 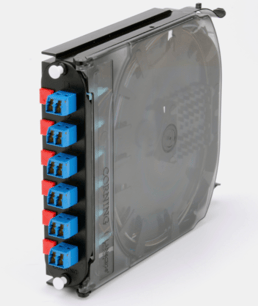 With the move to higher and higher bandwidth, there is an industry emphasis on performance of optical fiber terminations. This performance is measured in both insertion loss as well as reflectance. Standards organizations, such as the IEC and the TIA/EIA, have both recognized the need for both improved connector performance and consistency in the way connector performance is measured across multiple vendors. Both IEC 61753-1 and TIA/EIA 568, apply grading systems to optical fiber terminations. This standards-based industry focus on performance has led to the increase in factory-polished and fusion-spliced technologies since fusion splicing has been, and remains, the gold standard when it comes to a dependable low-loss and low-reflectance connector.

Another driver of the use of fusion splice termination technologies is in the increased use of single-mode fiber in applications such as in-building networks that have traditionally deployed multimode fiber. This has occurred because of the gradual reduction in price of single-mode optics vs. multimode optical transceivers (e.g., small-form-factor pluggable [SFP]) as well as the extended reach and simplicity of specifying single-mode fiber for network links. Simply put, single-mode fiber has remained the steady performer. Even with new generations of single-mode fiber with reduced attenuation and better bend performance, these newer fibers have remained backwards compatible.

In contrast, multimode fiber has progressed through OM1, OM2, OM3, OM4, and now OM5 with the latest generations promising increased reach and bandwidth. However, these fibers have not surpassed the performance of single-mode fiber in these respects. Many in-building and campus network owners

Another key factor driving fusion splicing is the innovation and cost reductions that have resulted from competition between fusion splicer manufactures. In the early days of fusion splicers, they resembled a suitcase rather than the compact, smart, technology-enabled products of today. The fusion splicer of yesteryear could often cost the same as a new car. Even as the capabilities and ease of use of the fusion splicer has increased, prices have decreased as shown in Figure 2. 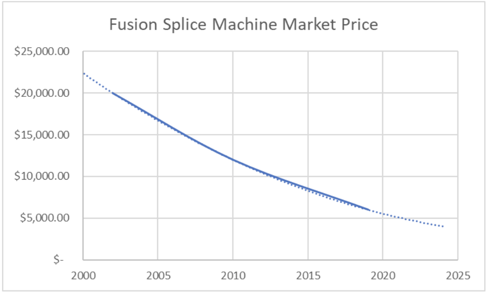 Today a very capable splicer can be purchased for a few thousand dollars. This paradoxical shift has resulted in a reduction of barriers for contractors and end users in utilizing the highest performing field-termination method, which is the pigtailed splice cassette.

Why Pigtailed Cassette Based Splicing Wins

While pigtail splicing is not new, how this termination method manifests itself has changed markedly due to innovations within the optical fiber hardware market. Corning introduced its first pigtailed splice cassette some seven years ago. The voice of the optical fiber termination market was clear. At the time, pigtail splicing was complicated and labor intensive requiring separate hardware for splicing, an extensive bill of materials, and time-consuming routing between splice and termination housings. The pigtailed cassette changed all of that and created a market shift. As shown in Figure 3, a recent survey revealed that cassette-based splicing is leading the charge among fusion splice termination processes.

When certified optical fiber contractors were surveyed, the majority confirmed their utilization of cassette-based termination over other fusion spliced termination methods. The question becomes what drives the preference for this winning technology.

The pigtailed splice cassettes greatly reduce product complexity. The pigtailed splice cassette combines all the products required to terminate the optical fiber cable in a single part number. This one-part number includes an adapter panel, factory-polished preterminated pigtails (prestripped and routed within the splice tray), the splice tray itself is integrated into the cassette. Even the consumables required to splice such items as transport tubing, tie-wraps for strain- relief, and heat-shrink splice protectors are included. This reduces the complexity of specifying, ordering, and installation, allowing an optical fiber link to be built with three part numbers: the enclosure, pigtailed cassette, and cable.

simply routed to the cassette and then splicing can begin. This can reduce installation time by up to 40%. Simplified routing and preparation not only save time but also avoids the possibility of damaged cable components due to improper routing or handling.

Despite the advances in field-installable connector technologies such as splice-on connectors and no-epoxy/no-polish connectors, each of these installation methods will have a small number of connectors that will not pass final certification testing with the first installation attempt. This is simply due to the conditions surrounding field installation such as installer proficiency, installation tools, or splice machine maintenance as well as cleanliness of the installation environment. Most connector types allow only one chance to install the connector properly otherwise it is scrap. While low, this scrap rate is a well-known aspect of utilizing field installable connectors that contractors have accepted and build into their bidding and other their business practices.

The pigtail splice cassette as a means of field termination of optical fibers has all the advantages of the factory-polished connector and one key advantage that these other termination methods do not have is spare fiber length. This spare fiber length allows the installer the freedom to make a mistake occasionally or to resolve an occasional fusion splicer maintenance issue without the consequence of a scrap fiber connector. Even with a liberal fiber prep length of 50 mm, the 1 meter of spare fiber in the pigtail splice cassette allows for up to 20 resplice cycles. This virtually guarantees a passing result even if a resplice of the pigtail is necessary. This is essentially a 100% guaranteed field-termination method.

A key benefit of the splice cassette is that the termination process is the same regardless of connector type or fiber type and is nearly identical to the process to butt-splice optical fibers. Therefore, one training program can provide the capability to terminate or splice any fiber or connector type. Combined with the simplicity and ease of use built into modern optical fiber splice machines, this is complimentary to establishing competency and capability of the fiber technician. Additionally, the use of pigtailed splice cassettes creates low-risk reaccess since the cassette is modular in groups of 12 or 24 fibers and protects the fiber and connectors inside of the cassette itself.

Another aspect that affects ease of installation is an appropriate enclosure in which to terminate. In the early days of cassette-based splicing, the focus was on rack-mounted enclosures since these enclosures represented most installations. As optical fiber drives deeper into the network approaching the network edge, Corning has met the demand by introducing wall-mounted enclosures, a single cassette enclosure and most recently NEMA-rated enclosures all of which are fully compatible with the splice cassettes. Additionally, Corning has completed qualification of the CCH pigtailed splice cassettes to GR-3125 which allows the cassettes to be used in the appropriate NEMA-rated enclosure in the nontemperature-controlled outside plant environment. 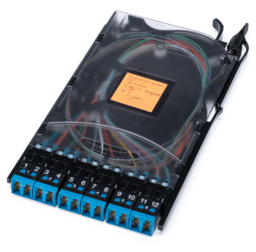 Although pigtail splicing has been around since the beginning of the optical fiber revolution, the process as a primary field termination method has grown considerably with the combination of the splice cassette. The cassette has been a catalyst, breathing new life into an old technology. Additionally, barriers to using cassette-based termination are being lowered such that the technology is becoming a primary means of fusion-based termination methods. As fusion splice machines incorporate new technology, become easier to use, and more affordable, the most successful contractors and end users will continue the trend of adopting cassette-based termination as their primary termination option. This will ensure improved performance, a reduction of installation labor, the elimination of risks, and simplification of their operations.