If you design wireless networks, or are involved in the infrastructure behind them, here are some important trends to watch for in 2019. 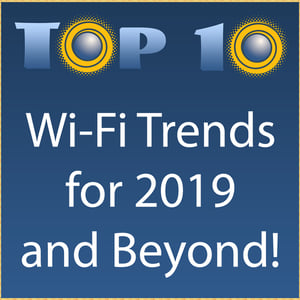 IEEE 802.11ax, has the goal of improving the average throughput per user by a factor of at least four in dense user environments. Ratification of 802.11ax is anticipated by IEEE in December 2019, but the standard is largely finalized, so leading Wi-Fi vendors will be shipping “pre-standard” devices in 2019.

802.11ax supports multi-user, multiple-input, multiple-output (MU-MIMO) technology, meaning that a given access point can handle traffic from up to eight users at the same time and at the same speed. Previous-generation APs divided their attention and bandwidth among simultaneous users.

To simplify product recognition, the Wi-Fi Alliance (the body which certifies Wi-Fi device interoperability), will be calling 802.11ax products “Wi-Fi 6”. According to the Wi-Fi Alliance “Wi-Fi 6 will provide the capacity, coverage, and performance required by users—even in dense environments such as stadiums and other public venues. Wi-Fi 6 networks enable lower battery consumption in Wi-Fi 6 devices, making it a solid choice for any environment, including smart home and IoT uses.” The WFA certification program for Wi-Fi 6 is expected in fall of 2019.

In the U.S., both AT&T and Verizon have announced the availability of 5G cellular service in select cities. However, there are no 5G mobile client devices on the market. Access to the AT&T and Verizon 5G network is through a local gateway or “hotspot” which converts the carriers’ 5G service (24GHz for AT&T, 28, and 39GHz for Verizon, according to the companies’ websites, respectively) into a standard Wi-Fi signal for use by any Wi-Fi enabled device. 5G will not replace Wi-Fi; in fact, the cellular service providers are more dependent than ever on Wi-Fi to provide their services in all locations.

Recent wireless standard amendments IEEE 802.11ac, 802.11ad, and now 802.11ax, are capable of providing the bandwidths typically associated with cabled devices, including high definition video.  The demand for mobile video is high and will be higher. In 2018, websites served to mobile devices accounted for more than half the web traffic for the first time. Video is an enormous component of mobile traffic. Read more