25G networking has quietly become the building block of enterprise and data center network upgrades. The current wave of 100G upgrades are built on 25G lanes delivering cost-effective 100G networks. 40G networks will remain a staple in the enterprise and the data center for the short term, but 25Gs role in building future networks is bright.

In contrast to 40G, 25G is being introduced directly to the edge NICs and switches, rather than a line side upgrade. Unfortunately, simply installing an SFP28 transceiver into an SFP switch port does not simply upgrade a port to 25G. Edge devices must be upgraded to support 25G. Upgrading the sheer volume of edge devices in a network will require both budget and time. Advances in transceiver technologies are now available to allow enterprises and data centers to upgrade only portions of their network to 25G while deferring upgrades on other portions into the future. 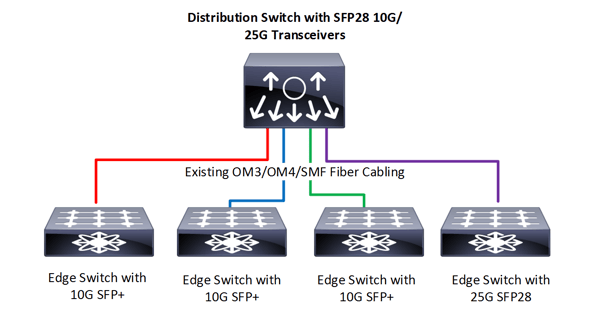