(This case study from Wilson details how a better cell signal aided a hospital - check it out below. -Teddi)

Named one of the nation’s best children’s hospitals by U.S. News & World Report in its 2019-20 rankings, CHOC Children’s Hospital is committed to providing the highest quality pediatric care. For over 55 years, CHOC Children’s strives to nurture, advance, and protect the health and well-being of children. Today, over two million children throughout Southern California count on CHOC to be there during life’s most critical moments; regardless of their family’s ability to pay.

To provide world-class care, CHOC clinicians routinely access electronic medical records, receive clinical notifications, consult with colleagues, and more through their smartphones, tablets, and other mobile devices. Because cellular connectivity is the most secure method for accessing the internet, it has become a critical component to providing quality patient care at most hospitals.

Doctors, nurses, administrators, and patients at CHOC would often complain about the poor cell signal reception they experienced in different parts of the hospital, regardless of mobile carrier.

Parents of patients regularly used their phones in an effort to keep family members apprised of their child’s condition. At times, this lack of cell reception was merely an inconvenience. At other times, the inability to call or text inside the hospital became a source of frustration and anxiety. 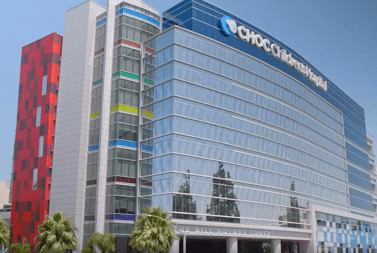 The inadequate cell coverage was most pronounced in the basement tunnel connecting two of the buildings that comprised the CHOC campus. Being an area where patients were transferred from the ER, this was deemed one of the most critical locations for improved cell connectivity.

In response to the complaints, CHOC explored a variety of solutions; looking closely at several vendors and pricing options. Ultimately, they even submitted an RFP for an Active DAS system.

As Adam Gold, CHOC’s Chief Technology Officer explains: “Although it was something we wanted to do and something that we thought would add value, from a cost perspective, from an implementation perspective, and the impact to the organization…it didn’t seem right for us.”

Plus, an Active DAS system would not offer the multi-carrier solution that CHOC so desperately needed. It would also take over a year for installation and cost in excess of $2 million to realize.

Fortunately, there was a more cost-effective solution.

For CHOC, the deciding factor was knowing that a WilsonPro system could distribute the signal for multiple carrier networks throughout the hospital in a centralized way. Unlike an Active DAS system, a WilsonPro cellular amplifier solution didn’t require any additional equipment or maintenance for each provider.

In total, roughly 370 Wilson dome antennas, 34 WilsonPro amplifiers, and about 65,000 feet of cable was installed.

By installing a WilsonPro solution instead of an Active DAS system, CHOC benefited from a cost savings of 80 percent. However, the ultimate test would be the improvement (if any) of cell signal coverage across the CHOC campus. All that remained was the system’s one-time turn on.

To the excitement of all around, the difference in cellular connectivity was noticed right away.

Employees were overjoyed to receive text messages while sitting at their desks; an occurrence for some which had never happened before the WilsonPro installation. Others took immediate notice when they got a signal in areas of the hospital where they never expected service before.

Amazingly, some even streamed video in areas of the building that had zero cell signal before. For a hospital like CHOC, the importance of cellular connectivity was always about the patients.

Contact us to see how a WilsonPro cellular amplifier solution can help solve cellular connectivity issues in your hospital or building.