Does the Type of Perforated Tile in Your Raised Floor Data Center Matter to You?  It Should!

Data centers frequently use the space under their raised floors to deliver cooling throughout their facilities.  Air is pushed into these underfloor spaces by perimeter computer room air conditioners (CRACs) or from high volume air handlers.  Unfortunately, many raised floor data centers have shallow plenums and/or clutter under the floor.  The result? High velocity horizontal underfloor air: the large amount of forced air is pressed into a small, restricted underfloor space and travels through so quickly that standard perforated floor tiles simply cannot keep up. 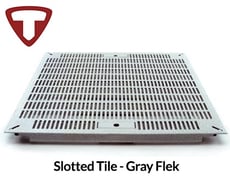 inlets.  Triad’s slotted and chamfer tiles have patented hi-plume stratification fins that grab the air and redirects it up, out of the plenum space and into the room, delivering the air to the rack inlets.  Standard competing tiles deploy 25% open area; Triad’s chamfer tiles feature a 56% open area design and Triad’s slotted tiles have a 65% open area design.  In fact, Triad tiles have been proven - through independent laboratory testing and validation - to be superior to all other perforated tiles in the market when used in data center applications with high underfloor velocities.

One of our customers learned firsthand how important airflow is to a cooling system.  He kept close tabs on his facility’s metrics and evaluated his power usage and high fan speeds, quickly learning that he needed to reduce and eliminate supply air recirculation and return air net bypass air.

capacity.  He just needed to be able to deliver the air to the right locations in the racks and was referred to Triad.  He was immediately impressed by the quality of our floor tile construction, the patented drop-away handles, and the ingenuity behind our stratification fins and increased open area.  But we all know seeing is believing, so we gave him a slotted tile to try out in his facility.  He dropped it into his existing flooring structure and watched as the highest rack temperature in the room dropped 15 degrees in front of the rack and 10 degrees in the back.  Our customer had found his solution.  He was sold, and implemented the tiles strategically throughout his facility.

He still sees the benefits of the Triad tiles and their efficiency was underscored when he noticed his temperatures were way off in one cold aisle.  He walked the floor and realized someone had lifted four tiles and had placed them in the wrong direction – the tiles had been rotated so the stratification fins were not directing the flow of air correctly.  He popped the four tiles up and reoriented their position into the floor.  The fix was quick, easy, and he saw immediate correction of temperature in his data center.

While it may seem that all floor tiles are created the same, we know empirically that is far from the truth.  Nearly all raised floor data centers have deployed standard 25% or 56% perforated tiles.  There is significant opportunity to replace these tiles with Triad slotted or chamfer panels and save the customer both capital and operating expenses.