As the Internet of Things (IOT) explodes, enterprises would do well to re-assess how they’re going to accommodate all that data coming from various “things,” according to a recent Gartner report.

In many cases, it’s simply not feasible to send all that raw data to a single, central data center, largely because it introduces too much latency.

A better approach is to establish multiple micro data centers (MDCs) at the network edge, to collect data from surrounding devices and perform some processing locally. That will dramatically reduce the amount of data sent to the central site, and combat the latency issue, the report says.

But what exactly goes into an MDC? It should be a self-contained unit, with one or two racks of IT gear and all required power and cooling. It’s that self-contained nature that differentiates MDCs from traditional small data centers or the server closets you might find in remote office/branch office locations, although MDCs could also be used in those cases. Indeed, you can install an MDC virtually anywhere where you may have a little extra space.

As Gartner correctly points out, MDCs are nothing new – they’re a form of prefabricated modular data center that’s been around for years in vertical industries such as mining, oil and gas, and the military –organizations that routinely put data centers in isolated and perhaps harsh environments. 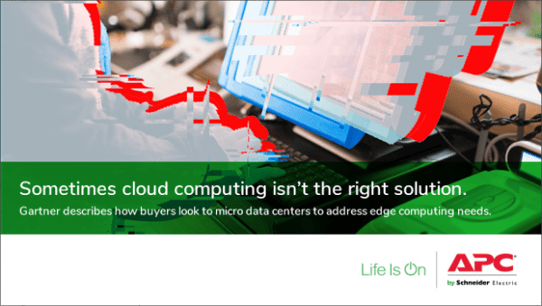 There’s also telematics data on vehicle usage as well as driver behavior monitoring for usage-based insurance policies. Smart buildings have all sorts of networked sensors monitoring everything from highly localized temperature and lighting to water pressure and security systems. But the IoT workloads MDCs handle are different in many ways from traditional data center workloads because, Gartner says, they involve “massive datasets” continuously generated by various sensors. Gartner cites examples including smart electric meters that drive process automation for manufacturers. Retail locations may have smart shelves that drive supply chain applications, along with augmented or virtual reality applications.

In each of these cases, the MDC will collect data and provide some local processing and analytics, ferreting out only that data which needs to be forwarded to a central site.

One common attribute of an MDC is that they are typically located in areas with few or no IT personnel, so they must support a high degree of automation and remote management. As the Gartner report says: “Buyers are looking for ways to design MDCs to run autonomously, but be controlled centrally. They want easy deployment, simple replacement, and remote monitoring and management.”

MDCs fit the bill because they are based on standard, repeatable designs that are pre-assembled in a factory and delivered as complete solutions, ready for rapid deployment. In addition to all required IT gear, they also include all supporting infrastructure, including UPSs, power distribution units (PDUs), cooling, environmental monitoring, security and management software, Gartner says.

Of course, as IoT drives improvement and efficiencies, it also ramps up demands on data availability. MDCs address this issue by optimizing infrastructure to maintain reliability and availability to ensure Certainty in a Connected World which is mission critical in this landscape.

It’s refreshing to have the likes of Gartner covering the MDC concept, and APC believes correctly noting that it stems from the modular, prefabricated data centers that companies such as Schneider Electric have for years been delivering to customers around the globe. Models such as the Micro Data Center Xpress exemplify the sort of MDC the Gartner report evaluates.

Download the complimentary report, “Market Trends: Take Advantage of Opportunities IoT Creates for Micro Data Centers at the Edge,” and see what Gartner has to say. Hurry, this report is available for a limited time.