In May 2014, the Federal Communications Commission (FCC) issued a report and order known as the Network Protection Standard. The guidance, backed by major cellular carriers, introduced new regulations for cell phone signal boosters, including specific technical requirements designed to minimize interference from consumer signal boosters to wireless networks and towers. 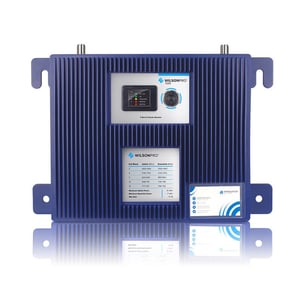 Up to that point, cell phone signal boosters available in the market were relatively powerful three-watt radios, strong enough to knock out a network tower or create enough interference that would result in dropped calls. The interference led to many networks and distributed antenna system (DAS) providers t ocall for outlawing signal boosters altogether.

WilsonPro set out to design a cell phone signal booster with increased performance that still met all of the requirements of the new regulations. WilsonPro took the same basic engine of previous market models, and, with some fine tuning, found they could squeeze more power out of the new laws. Instead of buying off the lot, WilsonPro engineers built a race car by leveraging better materials that allow the "engine" to perform at maximum output. Their work resulted in the WilsonPro 1000, which provides a three decibel (dB) gain in performance versus other boosters on the market (+12dBm vs. +15dBm).

The WilsonPro 1000 also includes WilsonPro's XDR (Extra Dynamic Range) technology, which enables the booster to reduce power without shutting down under signal overload conditions. This unique XDR feature stands in contrast to many competing systems, which shut down when they reach a maximum incoming signal strength threshold, causing the indoor cell signal to drop out. It also eliminates the need for costly site visits to restart a booster that has shut itself down due to oscillation or overload conditions.

The WilsonPro 1000 provides enhanced cellular connectivity for a variety of commercial users across industries, including hotels, hospitals and office buildings.