Belden & The 4K Resolution Of The Future

It may seem like just the other year that 1080p transmissions and broadcasters were making headlines, but resolutions at 1080p have actually been on the market for close to a decade now. Understanding the increased bandwidth demands stemming from better broadcasting technologies seems fairly simple at first glance. Higher resolutions = higher data transmissions = a need for better infrastructure to deliver it. However,  diving into "4K" is not quite so simple - between the lack of accepted standards, current applications in the market, and innovations for transmitting and receiving data, there are a substantial number of variables at play both helping and hindering 4K's move into the mainstream. 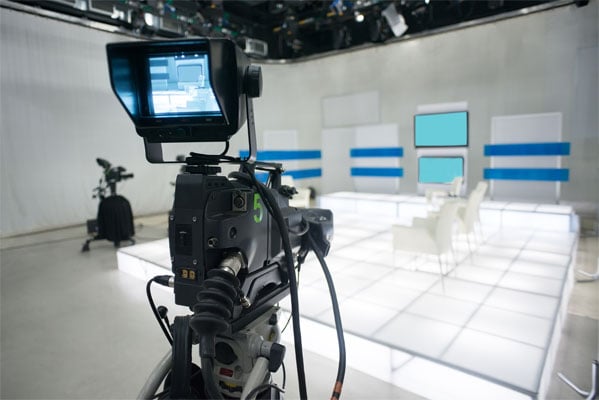 4K is the colloquial expression for the coming higher quality resolution of UHDTV's (ultra high definition televisions), which may refer to either 3840 x 2160 or 4096 x 2160 resolutions. This new technology is set to replace the older HDTV resolutions of 1920 x 1080 or 1280 x 720 - Although a confusing difference in the naming convention between UHDTV and HDTV technologies is that 4K for UHDTV's actually refers to the horizontal pixel count, not the vertical pixel count that previous HDTV's referenced.

When you see a label on that fancy new HDTV you've got your eye on that says '1920x1080p25', have you thought about what that actually means? The resolution size, or frame size, is fairly easy to pick out (the number of horizontal pixels x the number of vertical pixels). The p stands for the scanning system used (either p for progressive scanning, or i for interlaced scanning). The frame rate, or the number of video frames per second is tacked on at the end, although many manufacturers often drop this part.

So you might be asking yourself - Why does this matter? And what does it have to do with increased bandwidth demands on our networks? This transition matters, because the amount of bandwidth required could be huge: A simple extrapolation from how many megapixels each resolution size requires should suffice - 1080p = ~2 megapixels & 4k = ~8 megapixels. A four-fold increase in the number of pixels required to be transmitted!

While the pixel density of new UHDTV transmissions will be 4 times larger than HDTV, that does not necessarily mean that file size will be 4 times larger. Pixel compression rates and codecs have allowed big savings on bandwidth through coding miniaturizations, among other things. The High Efficiency Video Coding (also known as HVEC) video compression format is the next evolution of H.264/MPEG 4 AVC, and optimizes the use of Coding Tree Units (CTU's), among many other advancements. With upgraded chipsets and a more efficient way in which video is encoded and decoded (both from the broadcasters and from the consumers ends), there is still hope for networks to support this coming migration.

In fact, tests with HVEC compression have shown that it can double current data compression rates, and that it can support a transition to 8K (8192 x 4320) video. This is huge for the film industry, many of whom are looking to switch from film to high-res recording - and 8k is the reasonable starting point for comparison between the two.

HVEC was developed jointly between several different organizations, including:

Now that you understand a little of the background behind HDTV and 4K, there is one last piece to the puzzle - the marketplace. Many consumer television sets from the past 5+ years are now equipped to handle 1080p transmissions, and many since the end of 2013 are becoming capable of handling 4k and 4k HVEC. Streaming internet content, gaming, pay per view and specialty programs from service providers are all seeing 1080p commonplace now, although broadcasters and studios are not budging much beyond 720p and 1080i. Continued widespread adoption of TV's capable of receiving and decoding higher resolutions will certainly spur content providers and broadcasters to continue migrating, but the costly investments in recording equipment seem to be too big of a hurdle for many of these organizations to overcome right now.

So remember, while the future of television and broadcast is going to be a crisp, high resolution it will be a picture that you're probably going to enjoy from limited sources in the foreseeable future. 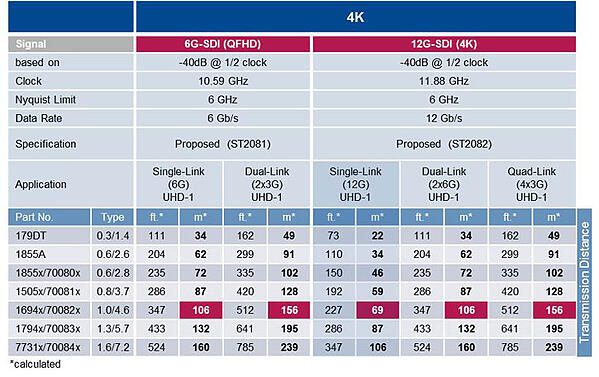 Belden’s 1694A for example can run a minimum 113 meter with HD. With 2K signals 1694A runs a minimum of 78 meters, or 35 meters less when compared to HD. In general, all of these lengths can be improved by using our HD coaxial cables and BNC connectors. See for example the 140 meter at HD with 1694A.

If you remember that the bandwidth of 4K is 8 times HD and 4 times 2K, everyone would expect the minimum distance of a 4K signal to be less than HD or 2K. But look at the red squares. The chart clearly shows how Belden’s 1694A runs 106 meter with QuadFull-HD on a single-link! In other words: 28 meters further than 2K.

To learn more about 4K resolutions and necessary data rates, click through below to read about Belden expanding on this new technology: