The adoption of new form-factors and features is nothing new with the dawn of new technologies. The 400G era is upon us and like previous technology cycles, the 400G market will feature different transceiver form factors targeting specific network applications.

Service providers required a pluggable transceiver for long reach and dedicated technologies, such as coherent detection. The data center team required a solution for a short reach (up to 2KM) application with both low power consumption and low cost.

The CFP form factor was the first 100G pluggable transceiver, providing support for both short and long reach applications, but was very large and consumed a high amount of power (12W). As technology and components improved in size and power consumption, the smaller CFP2 and CFP4 were introduced to the market. Despite technology improvements, embedded coherent technology for 100G and 200G are still only available today on CFP and CFP2 form factors.

Understanding the questions behind 100G applications is important in anticipating how 400G will be adopted.

Following the same logic as 100G, the 400G is a priority for the large data centers and, at a lower scale, for service providers.

400G requires PAM4 modulation for transmission, making the reach more challenging. The initial 400G transceiver reach will be limited to only a few kilometers. Longer reach will require coherent detection and its support technologies, including amplification, and dispersion compensation.

Like 100G, 400G will see similar adoption based upon the intended applications. Most likely a dedicated form factor for the data center and another for longer reach applications. The early 400G technology development is avoiding the "intermediate" form factors (i.e. CFP2, CFP4) that 100G adoption followed.

400G will be introduced with two form factors for the access networks and data center. 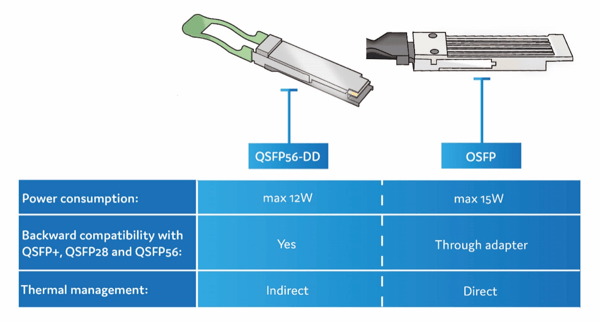 The OSFP integrates thermal management directly into the form factor, the QSFP-DD does not.

*For more information in the ProLabs blog article "QSFP-DD vs OSFP, the match!"

Both QSFP-DD and OSFP are designed for intra-DC applications including DAC, AOC and optical connection up to 2km. Additional variants are in development to support data center interconnect (DCI) with longer reach and other technologies like DWDM super channel.

The CFP8 form factor, defined by the CFP MSA (www.cfp-msa.org), is radically different than QSFP-DD and OSFP:

With its large footprint and high-power consumption (up to 24W), the CFP8 is intended for transmission application. The initial version (CFP8 400GBASE-LR8) will support up to 10km, using 16x electrical lanes of 25G NRZ which are converted to 8x lanes of 50G PAM4.

Additional variants using coherent detection technology that will support up to 80KM are down the road. In addition to driving longer distances, the CFP8 opens the door to 800G. 800G is possible by a combination of 50Gbps PAM4 modulation DSP, coherent detection and multiplexing of lasers to the CFP8's 16x electrical lanes. Clearly, this technology is far off on the horizon.

The 400G era is upon us. Understanding technology applications will help us better understand the transceiver technology adoption.